“Gut Microbes May Influence How Well Radiation Therapy Works against Cancer” was originally published by the National Cancer Institute. 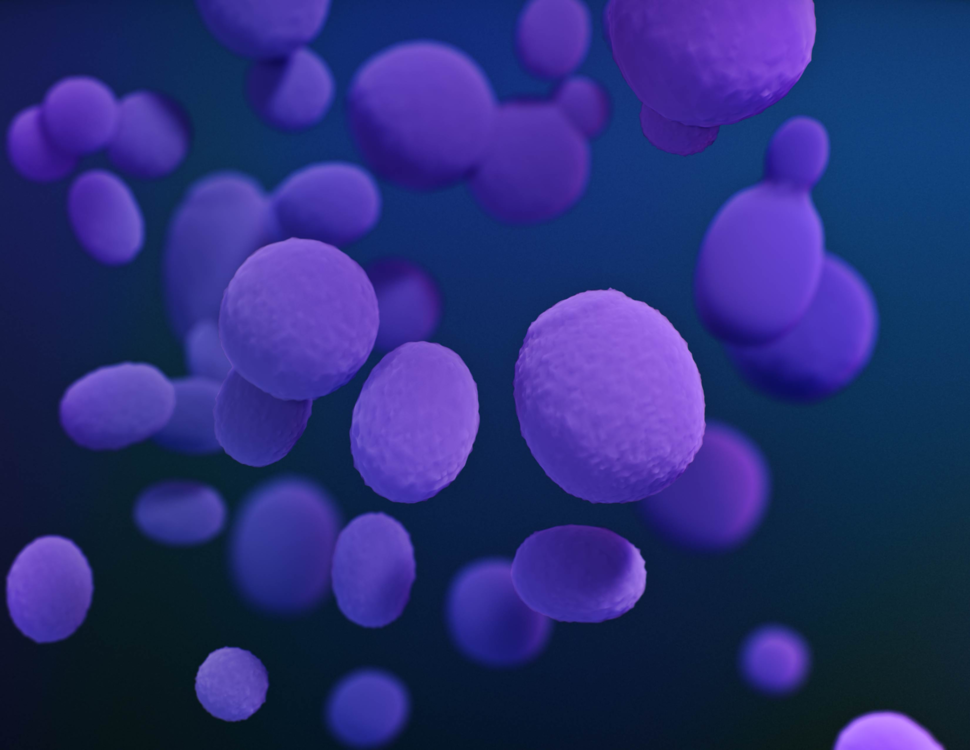 Fungi in the gut (purple) may affect how tumors respond after radiation therapy by disrupting the immune system’s response to the cancer. Credit: Centers for Disease Control and Prevention/Stephanie Rossow

The researchers also identified a fungi-sensing protein in tumors that may play a role in this phenomenon. Using samples from human tumors, they found that people with breast cancer or melanoma that had higher levels of this protein did not live as long as those who had lower levels.

We’re just [beginning] to understand how the microbiota help in terms of host immunity in cancer therapeutics,” said Mansoor Ahmed, Ph.D., of NCI’s Division of Cancer Treatment and Diagnosis, who was not involved with the study. A more detailed picture of these interactions could eventually help researchers design personalized treatments to alter the gut microbiome prior to cancer therapy, Dr. Ahmed explained.

The details of how the immune system helps fight cancer are still being uncovered. Early work in the field led to the rise of immunotherapies: cancer treatments that coax the immune system to attack and kill tumor cells. These therapies have already revolutionized the treatment of several types of advanced cancer, including melanoma and lung cancer.

But recent research has revealed that the immune system can also influence how well chemotherapy and radiation therapy work. And research has shown that the microorganisms normally found in the human gut—known as the gut microbiome—affect how immune cells do their job throughout the body.

The new study, led by Stephen Shiao, M.D., Ph.D., and David Underhill, Ph.D., both of Cedars-Sinai Medical Center, sought to build on this earlier research.

The role of the immune system in controlling cancer after radiation therapy has been under intensive study, Dr. Underhill explained. Without the contribution of immune cells, cancer cells are likely to grow back right after treatment.

“Radiation therapy kills tumor cells, then immune cells infiltrate [the tumor] and make it an inhospitable environment for the tumor cells to grow back,” he said. “It’s like a forest fire, where you can put it out, but there has to be a team to go in and clean up all the hotspots and make sure they don’t flare up and start all over again.”

“So why does a strong immune response happen sometimes [in tumors after radiation therapy] and not other times?” Dr. Underhill asked. To investigate, the researchers looked more closely at the complex interactions between the microbiome and the immune system.

Microbes Out, Microbes In

The researchers first used a cocktail of antibiotics to disrupt the normal gut bacterial communities in mice that had been implanted with breast cancer cells. When they treated the mice with radiation, the tumors continued to grow and the mice died quickly. The same thing happened in mice implanted with melanoma cells and in mice treated with a different combination of antibiotics.

The researchers also noticed something else in the mice: The gut bacteria that had been wiped out by antibiotics were replaced by fungi. To see what role this overgrowth of fungi might be playing in the response of immune cells after radiation therapy, the team treated another group of mice with an antifungal drug before radiation.

The antifungal treatment had the opposite effect from the antibacterial treatment: more tumor cells died after radiation therapy.

Further experiments found that administering a large amount of fungi into the gut reduced the effectiveness of radiation therapy even if bacteria weren’t depleted beforehand. This suggested that it was the presence of extra fungi—not the reduction in bacteria—that impaired the response to radiation therapy, the researchers reported.

After depleting bacteria in the gut with antibiotics and letting fungi expand, the researchers also found fewer tumor cell–killing immune cells in the tumor microenvironment after the mice received radiation therapy. But when the gut fungi were kept in check with an antifungal drug, a larger number of these helpful immune cells reached the tumors after radiation therapy.

To see if gut fungi may affect how well radiation therapy works in people, the team measured levels of a protein called Dectin-1 in samples taken from human tumors. Dectin-1, a protein that is found on the surface of some immune cells, is one of the main tools the human body uses to sense the presence of fungi.

People with higher levels of Dectin-1 in their breast or melanoma tumors tended to have worse survival than those with lower levels, they found. Going back to mice, the researchers found a corresponding result: Tumor cells in mice engineered to lack Dectin-1 were more vulnerable to radiation therapy.

While the mechanisms behind these observations are still unclear, Dectin-1 may mediate the response to radiation therapy, depending on the levels of fungi that it senses, Dr. Underhill explained.

So how could something as seemingly unrelated as the body sensing a change in gut fungi impact the immune response after radiation therapy?

“That’s the $20,000 question,” said Dr. Underhill. “But what I think this study does is put up a kind of red flag saying: ‘Let’s make sure we understand the fungi in the microbiome, because it could be having important effects on the immune response.’”

Researchers have already begun to test whether tweaking the composition of the gut microbiome can boost the effectiveness of some cancer treatments. In a recent study, making wholesale changes in the makeup of the gut microbiome improved how well an immunotherapy drug worked in some people with melanoma.

But scientists would like to try adjusting the microbiome in a more specific manner. For this, “we need to understand which microbial species are most relevant” to cancer treatment responses, said Dr. Ahmed.

“It would be really handy to be able to characterize a patient’s microbiome—both bacterial and fungal— and determine their expected prognosis, or how they’ll respond to radiation therapy, chemotherapy, or immunotherapy,” added Dr. Underhill. “Then we’d like to see whether it’s feasible to change that microbiome to make those therapies work better.”

Proteins such as Dectin-1 could potentially serve as biomarkers to identify people with a potentially unfavorable microbiome for future clinical trials, Dr. Ahmed said.

“I don’t think we’re too far away from that; I think human studies [targeting specific microbes before cancer treatment] are in the not-so-distant future,” added Dr. Underhill.

For now, Dr. Ahmed cautioned, people undergoing cancer treatment should avoid any temptation to tweak their gut microbes on their own with over-the-counter probiotic supplements or prescription drugs.

“We don’t want people going out and taking antifungal drugs, because we don’t have evidence yet that that would be helpful, and there could be reasons that it could be dangerous,” agreed Dr. Underhill.

On the flip side, if people undergoing cancer treatment are prescribed antibiotics, “that’s for a reason, and they’re going to be important,” he added, and they shouldn’t be skipped.